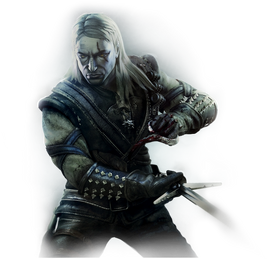 'The' Witcher, Geralt of Rivia

A witcher (or hexer) is an individual who has undergone extensive training and mysterious rituals (often taking place at "witcher schools" such as Kaer Morhen) in preparation for life as an itinerant monster-slayer for hire. Amongst some folk, they are referred to as vedymins (or, witchmen).

The witcher Geralt, the central character in Andrzej Sapkowski's Witcher series and videos games inspired by them, is said in the stories to be one of the greatest witchers. He is certainly legendary, but whether he remains famous or infamous is more open to interpretation.

Taken in as children (sometimes, kidnapped) when their innate abilities can only be hinted at, witchers-to-be are subjected to intense alchemical processes, the absorption of mutagenic compounds, and other trials to make them highly versatile against their opponents (many of which possess superhuman speed, strength and/or other dread powers). These procedures ultimately mean that each fully-trained witcher is a mutant. The key and permanent results of mutations shared by all witchers are:

Though it covers proficiency in basically any weapon that comes to hand, witcher training focuses on two primary tools - the Steel sword and the Silver sword - which are typically carried on the back. Most witchers are also frequent mixers and users of powerful potions, having developed a tolerance to their inherent toxicity but still limited to a few at a time (even one of their weaker brews will be fatal to an ordinary human). Finally, their formal magical training deals with Signs. Without extensive improvement and practice, these are mere tricks compared to what a sorceress can do, but they serve very well for someone with a sword in one hand to add a variety of edges to their efforts.

Though a witcher's eyes (see first glossary entry below) are one way to stick out, standard means of identification is the witcher medallion; this device aids in the detection of monsters, and no witcher would part with one willingly. (And of course, witchers are known for being 'hard to kill' - Leo Bonhart boasts a collection of three such medallions as proof of his martial skill.) The form of an individual medallion (head of a wolf, cat, griffin, etc.) indicates the school at which its owner was trained.

It is a common belief, even among witchers themselves, that they have no capacity for emotion. This may be debatable - and rather relative, considering the rigors of their training and the dangers they face as a matter of course. Perhaps they have simply never had the time (or exposure to society) to develop or recognize the reactions to mundane experiences that most take for granted.

Occasional references to witchers as 'non-human' are somewhat at odds with the original stories (in which Geralt only identifies witcher as a profession, never a race). There is certainly no official classification as such, and the relevant references (in the first game at least) are usually from Geralt identifying with the mistrust and/or hostility faced by elves and dwarves in human society.

Known witchers in Sapkowski's books are:

Self-styled Witchers: These people claimed they were witchers ... "in their own way", but Geralt quite rightly put them straight: 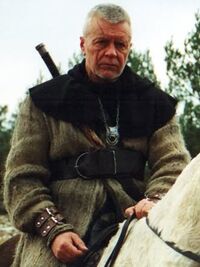 In the graphic novels[edit | edit source]

From the Wolf School:

From the Viper School:

Despite my long friendship with Geralt, I know little more about this peculiar brotherhood or guild than learned tomes provide. On top of that, I am obliged to discretion, so I shall write nothing more than necessary on the subject. Once as numerous as the beasts they fought, today the witchers are seen as a relic of times long gone. The exact character of their training remains a mystery. It is known it consists, among others, of the Trials - processes that transform the organism using a specific combination of secret herbs and infusions. Those who survive them gain superhuman reflexes, speed of reaction, the ability to see in the dark and many other traits making them lethal foes. During their training they learn swordplay and basics of magic, known as Signs. Armed in this set of abilities, the witchers can effectively fulfill their objective, that is protect humans from the monsters inhabiting our world.

Eskel, Lambert, and Vesemir return in The Witcher 3. Their pupil Ciri will play an important role, while Letho's appearance is dependent on decisions made by Geralt in the previous game.

From the Bear School:

From the Cat School:

From the Griffin School:

From the Viper School:

From the Wolf School:

The original Polish name for "witcher" is "wiedźmin". The English translation initially preferred by Andrzej Sapkowski was "hexer" and is the name used in the international version of the film adaptation. However, CD Projekt chose to translate it to "witcher" in the computer game, and this word was subsequently adopted by Danusia Stok (in her translation of The Last Wish) and even by Sapkowski himself (in Historia i fantastyka).

Warlock has been used in informal English translations, though "witcher" - being a neologism in English (as wiedźmin is in Polish) - is arguably better at capturing the spirit of Geralt's profession.

In other languages[edit | edit source]

In languages from the novel[edit | edit source]

In languages from the game[edit | edit source]