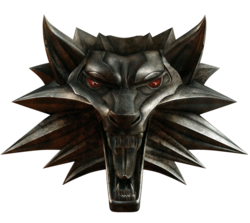 The School of the Wolf is one of the three schools mentioned in Witcher books and media. This school is based out of Kaer Morhen in the kingdom of Kaedwen, the school originally was a patron of the Kaedweni monarchy but fell out of favor due to Mage propaganda affecting the crown and the peasantry. This is also the witcher school to which Geralt belongs.

Students or adherents of this school include:

In the Zdrada comic there are some other witchers presented:

In the original computer game, Vesimir has a new apprentice and another witcher appears.

In The Witcher 3: Wild Hunt, there are mentions of adherents who lived before the massacre at Kaer Morhen.

There is also Wolf School gear which can be crafted.

In the Zdrada comic[]