Witcher Wiki
Register
Don't have an account?
Sign In
in: Saga characters, Dwarves, The Witcher characters,
and 9 more
English

Zoltan Chivay was a dwarf, veteran of the second Nilfgaard War, and a friend of the witcher Geralt. They first met when Geralt and his party were heading towards the Yaruga river from Brokilon, but the dwarf advised them to join his company and go eastwards. Zoltan was said to have been at least in his mid-fifties at the time of the meeting. It is from Zoltan that Geralt received his sword — a sihil.

Other members of Zoltan's company were:

He also had a talking parrot, Field Marshal Windbag, which he sold to the gnome Percival Schuttenbach when he started a jeweler's workshop in Novigrad.

“
The one walking at the front wasn't carrying anything. He had a small battle-axe in his belt, on his back was a long sword in a scabbard wrapped in tabby cat skins, and on his shoulder sat a green parrot with wet, ruffled feathers. ... 'Greetings. I'm Zoltan Chivay.'
”
— pg(s). 75, Baptism of Fire (UK edition)

“
Back in Mahakam we'd send sowbuggers like that down the coalface with a bundle o' powder and a leaky lamp.
”
~ Zoltan Chivay on A Dangerous Game

After the Battle of Brenna, Zoltan became engaged to Eudora Breckenriggs.

Zoltan returns in the final installment of the game trilogy and is Dandelion's partner in their business, the tavern "Rosemary and Thyme".

A dwarf, a soldier of fortune, a veteran of the Battle of Brenna, an unassailable optimist, a committed altruist, a lover of rough drinks and rougher songs, a master gwent player and, above all, a dear and loyal friend to me and Geralt – ladies and gentlemen, allow me to present Zoltan Chivay. We first became fast friends years ago, when Geralt and I ran into Zoltan and the band he was leading at the time across war-stricken Riverdell.

It proved our fate to cross paths many times after that, and we eventually became inseparable companions, sticking together through good and ill. At our tale's beginning Zoltan and I had gone into business together running a Novigrad tavern called the Rosemary and Thyme.

By saving me from the transport taking me to my doom Zoltan proved yet again he would never abandon a friend in need. In return, Zoltan soon found himself on the receiving end of an act of friendship. Suffering some financial difficulties, he had taken out a loan from one of the Novigrad mob bosses, and as a result had made many unfortunate enemies.

He planned to repay his debt by gathering a prize collection of gwent cards – a risky endeavor, given the cutthroat nature of Novigrad gwent circles at the time, and one that would have never worked without Geralt's help.

Zoltan features in the sequel and his appearance has only slightly changed. He first appears in Chapter I, standing on a gallows platform in Flotsam, having been accused of collusion with the Scoia'tael, alongside another friend of Geralt's — Dandelion (himself accused of debauchery and setting fire to a tower). The witcher intervenes and saves both their lives.

Since they saw each other last, Zoltan's engagement to Eudora has fallen through, as has his career in the mining industry, so he's settled for life as a "simple merchant", working as an occasional jewelsmith for a certain sorceress.

After the events in Flotsam, he heads to Vergen during Chapter II where he is reunited with his old pals, Yarpen Zigrin and Sheldon Skaggs. 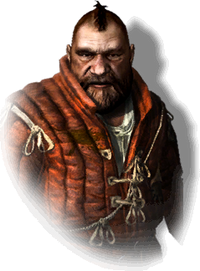 The dwarf Zoltan Chivay is a close friend of Geralt's and mine, met while we were sneaking through the forests and wilderness of Brugge and Sodden, when war raged all around and the hooves of Nilfgaardian cavalry thundered on the high roads. Like many of his kin, he later fought at Brenna in the Mahakam Volunteer Detachment, a unit that contributed greatly to the victory, although this fact is sadly ignored by most chronicles. After the war he wanted to start a business, and even thought about taking a wife, yet fate had things arranged a bit differently. Zoltan had proved his friendship to the witcher many times, eagerly standing at his side in any moment of need, disproving those who claim that each and every dwarf is a spiteful, aggressive son of a bitch, that they do nor care for human plight and that coexistence is impossible. I know many nonhumans and if anything stands in the way of coexistence, it is human ignorance, spite and ungratefulness.

They say a dwarf would get himself hanged for a friend, but Zoltan was in my company on the scaffold for another reason. The local authorities had accused him of colluding with the Scoia'tael, and that is usually enough to earn one the main role in entertainment like a morning execution.

The charges that Zoltan had contacts with the Squirrels were not entirely baseless. Though he did not actively participate in military action, the dwarf knew the unit's leader, Iorveth, among others.

It was not surprising, really, that, having encountered the aforementioned human spite and ungratefulness at every step, Zoltan sympathized with the dwarven and elven freedom fighters. He was balanced in his views, however, and valued loyalty to old friends above all else.

Though it was not exactly Zoltan's cup of tea to visit Henselt's camp, a place where non-humans were at best treated with mistrust and disdain, he decided to go with us. Yet he felt rotten, knowing nearby his kin were preparing to repel the same Kaedweni we were visiting.

Everyone's patience has limits. Thus it should not be surprising that he eagerly took the chance to leave Henselt's camp and head to Vergen.

After the fall of Vergen the roads were flooded with refugees. On one such road outside Henselt's camp, I met Zoltan, who had luckily managed to flee safely. It is hard to remember the last time I was as happy as when I saw his bearded face. Zoltan and I kept each other company during that journey and we reached safety together. But that is a different story altogether.

Zoltan went with us to Vergen and, with enthusiasm worthy of his military past, began training the local militia that would soon see it's baptism of fire. Though it appeared they would have a hard time, Zoltan was ready to defend the cause he believed in, fighting at the side of elves and men.

Given an occasion to heave an axe in good company, Zoltan grabbed it faster than I can unlace a woman's corset – which is pretty fast, provided I'm sober. He followed Geralt without hesitation and proved his worth, showing that there's more to him than just a loud mouth.

Zoltan won great renown during the defense of Vergen, closing the gate and stopping King Henselt's retreat nearly single-handedly. Thus he sealed the victory over the Kaedweni army that memorable day.

Just as I did, Zoltan decided to remain in Vergen when Geralt and Iorveth chose to travel to Loc Muinne to complete the final chapter of this story. There was still much to do in the newly independent Pontar Valley, and the dwarf turned out to be the right sort to take up some of the responsibilities.

Geralt first meets Zoltan in the Outskirts of Vizima, surrounded by racist thugs. After giving them a sound beating, the dwarf is surprised and very happy to see Geralt, whom he claims to have witnessed dying five years earlier with his very own eyes.

During the ensuing chat, the dwarf also mentions that his in-laws-to-be, the Breckenriggs (this name is spelled in a few different and interesting ways throughout the game: Breckering, Breckenridge, ...), who value material possessions more than Zoltan does. Lucky thing, since he has far fewer after the Common Cause Mine failed.

Zoltan is the one to acquaint Geralt with dice poker, and to give him a couple of pointers about whom to challenge. After the initial meeting, he can be found in the Inn for the remainder of Chapter I, except the very end when Geralt has to rescue Shani.

Later in the game, Zoltan can be found wandering around the Temple Quarter (roughly from 8:00 a.m. to 8:00 p.m.) and, if choosing to side with the Scoia'tael or take the neutral path, in the Old Vizima. He also often spends time with Golan Vivaldi.

The dwarf's name is Zoltan Chivay. He claims to have witnessed my death years ago in Rivia. Zoltan seems reasonable and pragmatic. He takes the world with a grain of salt and sees irony in most things. Just like other nonhumans, he also seems vexed by the racist atmosphere in Temeria.

I helped a dwarf being attacked by racists. He recognized me as an old friend of his.

In front of the inn in the Outskirts a group of racists attacked a dwarf, but I ignored them. It turned out the dwarf is an old friend of mine.

Zoltan managed to get to the Temple Quarter. The dwarf was happy to see me again.

I met Zoltan again. This time it was on a hill, when the fight between nonhumans and the Order began for earnest.

Zoltan organized the nonhumans' escape from the ghetto. I helped him and the group managed to get through the burning city. I bade farewell to Zoltan. I have a feeling I will not be seeing him soon.

In The Witcher Battle Arena game[]

“
Dwarven adventurer and close friend of Geralt of Rivia, Zoltan Chivay is an excellent warrior, who excels at close quarters combat. Zoltan is the perfect initiator, his skills allow him to quickly jump into the fray, as well as vacate battlefield hotspots when the situation becomes too intense. His passive skill allows him to deal 25% more damage to stunned enemies.

Bull Rush is a skill that can be used in various situations. You can employ it both to initiate attacks and to run away from enemies. Zoltan rushes towards the enemies, lifting them up in the air and temporarily disabling them. Bull Rush also does damage, but its main purpose should always be immobilizing enemies, so your team can finish the job. If you want to deal the finishing blow, you can activate Whirling Dwarvish, Zoltan’s main offensive skill. Upon activation, the dwarf begins to spin franticly dealing damage to opponents around him. As it’s an AoE (or Area of Effect) attack, it’s best used when there are multiple enemies around. The skill can be used while Zoltan is moving, so it’s also a good idea to utilize it when entering or escaping combat.

Worth it! is Zoltan’s special skill. It allows him to leap forward and sends a brutal shockwave that deals damage and knocks back enemies caught within it. Use it wisely as it can be a powerful tool capable of inflicting damage upon entire groups of foes.
”
~ CDProjekt